NT Thunder’s latest signing for the 2019 NEAFL season is an exciting tall order, with former AFL and SANFL player, Jack Hannath being unveiled.

At 201 centimetres and 102 kilograms, the 27-year-old ruckman will relocate from Adelaide to Darwin next week to join his new team.

Hannath went from the Central District Football Club in the SANFL to Fremantle with the eighth selection at the 2013 Pre-Season Draft. In a twist of fate, he was training with the Melbourne Football Club on TIO Stadium in Darwin when the unexpected news of his selection came through. The original plan had been for Melbourne to select him in the Rookie Draft later that same afternoon before Fremantle pipped them.

In 2013 Hannath started the season playing for Peel Thunder in the WAFL before being selected by Fremantle to debut in Round 5 against Richmond, a game the Dockers won by one-point.

Over the next four seasons, he played 20 games and kicked eight goals for Fremantle before returning to Central Districts in 2017.

With a frame suited to playing ruck, Hannath is also mobile around the ground and has an elite kick, which has also seen him used as a forward line target. 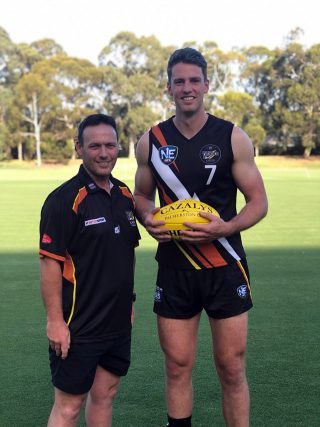 Having coached him for the past two years, NT Thunder Head Coach Darren Reeves is familiar with the big man’s style of play and spoke glowingly of his character.

“Jack is one of the most professional footballers I have come across. Not only is he an outstanding athlete but he holds himself to the utmost standards.

“At 27-years-old he is at the right age for a ruckman, but he still wants to improve and play at the highest level he possibly can.

“He is an excellent kick and moves well around the ground. His ruck work will be invaluable for us, and he will also be able to go forward and kick a goal. Off the field he will be one of the main drivers of our values and standards,” he said.

Having shouldered the majority of Thunder’s ruck duties in 2018, Jack Monigatti is expected to be used in a different role in 2019.

“We were really pleased to have Moners (Jack Monigatti) recommit for this season, and we’re keen to play two ruckmen but to also have him explore different positions, key position and defensive type-roles.

“We still see a big role for Jack (Monigatti) to be playing and think he will benefit greatly and develop further from having Jack Hannath around,” Reeves said.

NT Thunder Manager Andrew Hodges said Hannath’s signing was sure to get the other players and fans excited.

“We know we’ve been a little light on in the ruck department the past couple of seasons, so we made this a key focus for 2019. But it’s never easy to find someone of Jack’s calibre and experience, and not just on the field.

“To have him share his experiences and knowledge on what it takes to be an elite athlete is going to be invaluable to our young players who have aspirations to play at the highest level,” he said.

Hannath said after making a quick trip to Darwin last week he had no doubts about moving north.

“I’m very excited to be playing for NT Thunder; it’s something I am really looking forward to particularly at this point of my career. I’d been looking for a change in work, having finished study, and I was also seeking a move, so it’s not something I had thought about until this chance came up.

“And it was an opportunity too good to refuse. Everyone has been accommodating, particularly Andrew and Darren but the boys and everyone at the club made me feel welcome right off the bat, so it left me feeling good.

“I think it is a great opportunity for me in 2019 and beyond and I can’t wait to get stuck in properly,” he said.

Check back this afternoon for some video highlights of our latest signing in action.