NT Thunder has made seven changes to its team to play the GWS Giants NEAFL side on Saturday afternoon with several players unavailable due to minor injury or work commitments.

In good news for the Club, vice-captain and general in defence Justin Beugelaar heads the list of inclusions. Promising youngster Kyle Emery will join him in the backline.

Meanwhile, Croker Island’s lively small forward Justin Cooper will play his second game for the season while Lachlan Collihole, who was a late withdrawal in Thunder’s Round 12 win over Canberra, is another welcome inclusion.

Talented duo Jonathan Peris and Davin Ferreira are expected to add some flair and big ruckman Scott McLeod is a straight swap for first ruckman Ryan Smith, who will miss this weekend due to a minor leg infection.

Other players sidelined by injury include defender Daniel Weetra who has experienced delayed concussion after a hard hit in last Saturday’s loss to Southport and youngster Michael Mummery who has an abductor complaint.

Michael Hagan and Daniel Russell are unavailable to travel due to work, while Tony Olango has Next Generation Academy duties with Hawthorn and Michael Coombes has personal commitments.

Head Coach Andrew Hodges said he believed his team had enough depth to match it with the Giants.

“Our hand has been forced a little the past couple of weeks with some of the changes we’ve made but we believe we have a talented list of players and at any time any one of them can be called on to perform their role in the team.

“Our program is all about developing talent, so the fact we get to select some of our rookies in Academy players Beau Schwarze and Marcus Valastro as the emergencies is an opportunity for these young guys as well,” he said.

On GWS, Hodges said he was wary of the NEAFL’s bottom-placed team.

“We saw last week that there’s no room for complacency in this competition nor should we underestimate an opposition full of AFL talent.

“They are a professional outfit and playing on their home turf is an exciting challenge for us,” Hodges said. 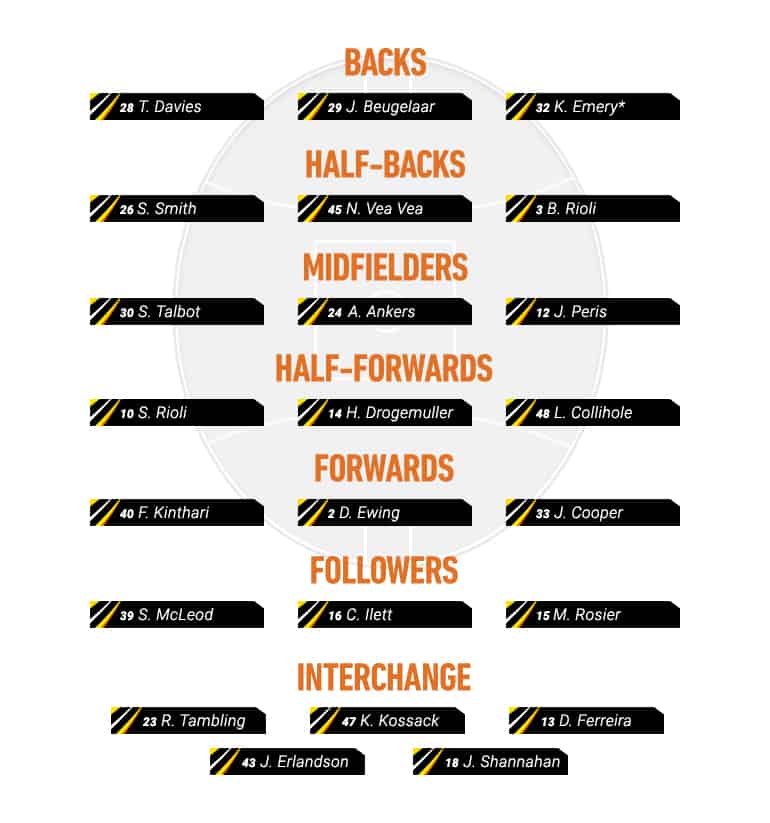 Sam Smith will be wearing number 7

Ben Rioli will be wearing number 46

Davin Ferreira will be wearing number 17

Scott McLeod will be wearing number 42

And If Marcus Valastro plays will be wearing number 20

You can live stream this game thanks to Tatts on ThunderVision